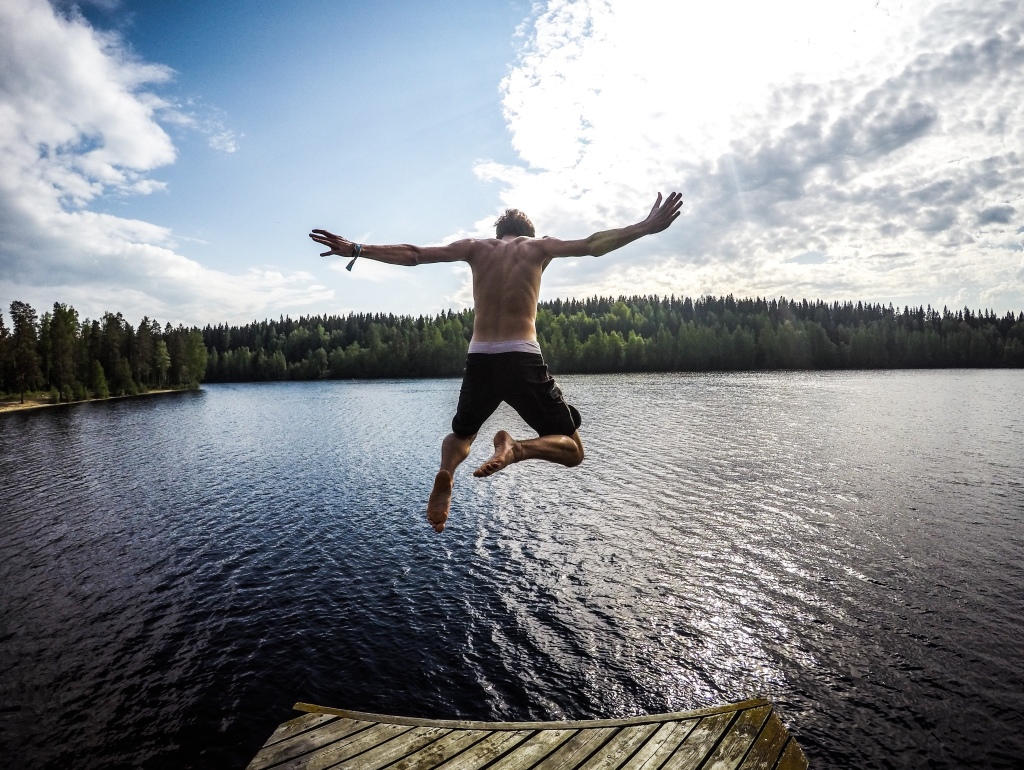 I was never a risk taker in my twenties. Not really. When confronted with a daunting challenge I usually crawled back into my comfort zone, where it was safe. I even signed up for a bungee jump in New Zealand and when I stepped up to the platform I backed out at the last minute. What happened to the adventurous boy who spent his youth climbing trees?

The truth was, he had disappeared into the sanctuary of rationality—something we all do by living safe, conservative lives. It wasn’t until my late twenties that I realised being rational had its own restrictions. So in 2010 I did what any irrational person would do—I sold all my possessions and moved to Berlin. My decision was met with immediate skepticism and raised brows. I understood their concerns—I had maybe enough money to live frugally for several months at best and I didn’t speak a word of German. But for the first time in my life I was allowing my courage to light the way, and trusted that this unknowable power (my gut feeling) would not only keep me safe, but would guide me through my journey. During the first leg of my journey I began to question: was I out of control, and if so, was I running away from my responsibilities? In that moment I realised I was looking for this other part of myself, the kid buried under all the fear and hesitation. I knew he still existed there somewhere.

“If one lets go of rational control, surrenders that, one will be animal-like in the sense of antisocial impulses.”

As long as we are behaving and thinking like rational human beings then we are in control—we have a leash on the animal-like part of ourselves, this “ugly, untenable, unsociable” creature that must be contained. It made me think of my stepdad while growing up. How ordered he was, and how he expected that same level of structure in my life. And if I failed to live up to that structure; if I came home late, or joined my friends at random, I would ultimately pay for it. And I wondered: had my fear of the irrational come from my stepfather’s disciplinary methods? His expectations of me to “keep your head down and tail up.” Perhaps the uncharted parts of myself had remained that way because I had identified with the guilty child for so long. In Tibetan literature they say, “Embrace your ten thousand horrible demons and your ten thousand beautiful demons.” In this regard, all our fears have to be embraced, entertained, honoured, and sought to be understood.

When I arrived in Berlin, I embraced the city with an open heart. I was open for almost anything. During those first few months I met a wonderful groups of artists and musicians. I took up filmmaking, wrote journals, sang and danced in the rain with gypsies, drank Glühwein, discovered love and romance, and made new friends wherever I went. I even secured my own place in Berlin after befriending a house meister (caretaker) who rented out the top floor of an apartment to me for a measly 50 euro a week. The most interesting thing was, most of my experiences didn’t cost me a dime. Even when I went to visit the island of Formentera in Spain, and I was down to the last of my savings, I met warm and colourful characters who opened their homes to me. When I was caught in a thunderstorm in Grunewald forest just outside of Berlin, a German man invited me in for dinner with his family. When I travelled to Iceland to embrace the incredible nature there, a friend put me up in his family’s cabin in the middle of nowhere.

I still had responsibilities, of course—organise my tax, deal with visas. I had to eventually find a teaching job when the money ran out. But my first year in Europe was the most exciting part of my journey because I was trusting in my intuition to guide me. And I was living moment to moment. My experience taught me that to discover was more important than to succeed, and it brought an abundance of joy and love into my life.

We are reminded everyday that we need to reach a certain goal or place in life by a certain age, that we must follow 10-step programs and attain as close to perfection as possible—march forward in the face of progress with a competitive spirit to win and generate wealth. Often when we are presented with an opportunity to follow our heart, throw caution to the wind, we often don’t listen to it—choosing to only trust in what appears to be rational, instead of finding the courage to act in spite of our fears. But without fear there can be no reward. Being irrational isn’t the same as being irresponsible. It is the stepping into the fear, embracing a dream or doing something that might not be completely planned out or structured and allowing fate to light the way. It takes courage to abandon our rational thinking, even the identity we have come to know, and trust in our instincts a bit more, not by viewing these gut feelings as disharmonious, or unknown external forces as a threat—but by allowing this lack of control to cultivate a deeper wisdom and understanding of ourselves.